Now no CE for laying cables, pipelines in the forest

Now no CE for laying cables, pipelines in the forest

Except in wildlife reserves and national parks

PANJIM: In what could bring major relief to various government and private agencies, the Ministry of Environment and Forests and Climate Change (MoEF & CC) has decided to remove forest clearing (FC) for laying various optical fibers underground, water or electricity pipes, in forest areas, with the exception of wildlife reserves and the national park.

Exemption is granted for the laying of sludge pipes and other underground cables along roads in the existing right-of-way with a maximum trench size of 2 m in depth and 1 m in width. 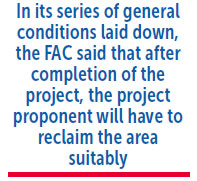 The FAC observed that while the area, where the underground pipes are to be laid, is already authorized for road construction under the provisions of FCA 1980 and that all compensatory withdrawals for the entire forest area concerned have been paid by the user agency, then the laying of underground sludge pipes in the diverted forest area in the existing rights-of-way, trenches two meters wide and two meters deep may be authorized.

“General approval is given to projects listed along roads in existing rights-of-way that do not fall into national parks and wildlife sanctuaries without tree cutting,” the FAC noted.

The FAC also said that if the net present value (NPV) has been charged for the entire forest area already diverted under the 1980 Forest Conservation Act, it will no longer be charged for piping. underground sludge in the right-of-way.

In its set of general conditions set, the FAC indicated that after the completion of the project, the project promoter will have to reclaim the area in an appropriate manner.

“What have we done with democracy? ...